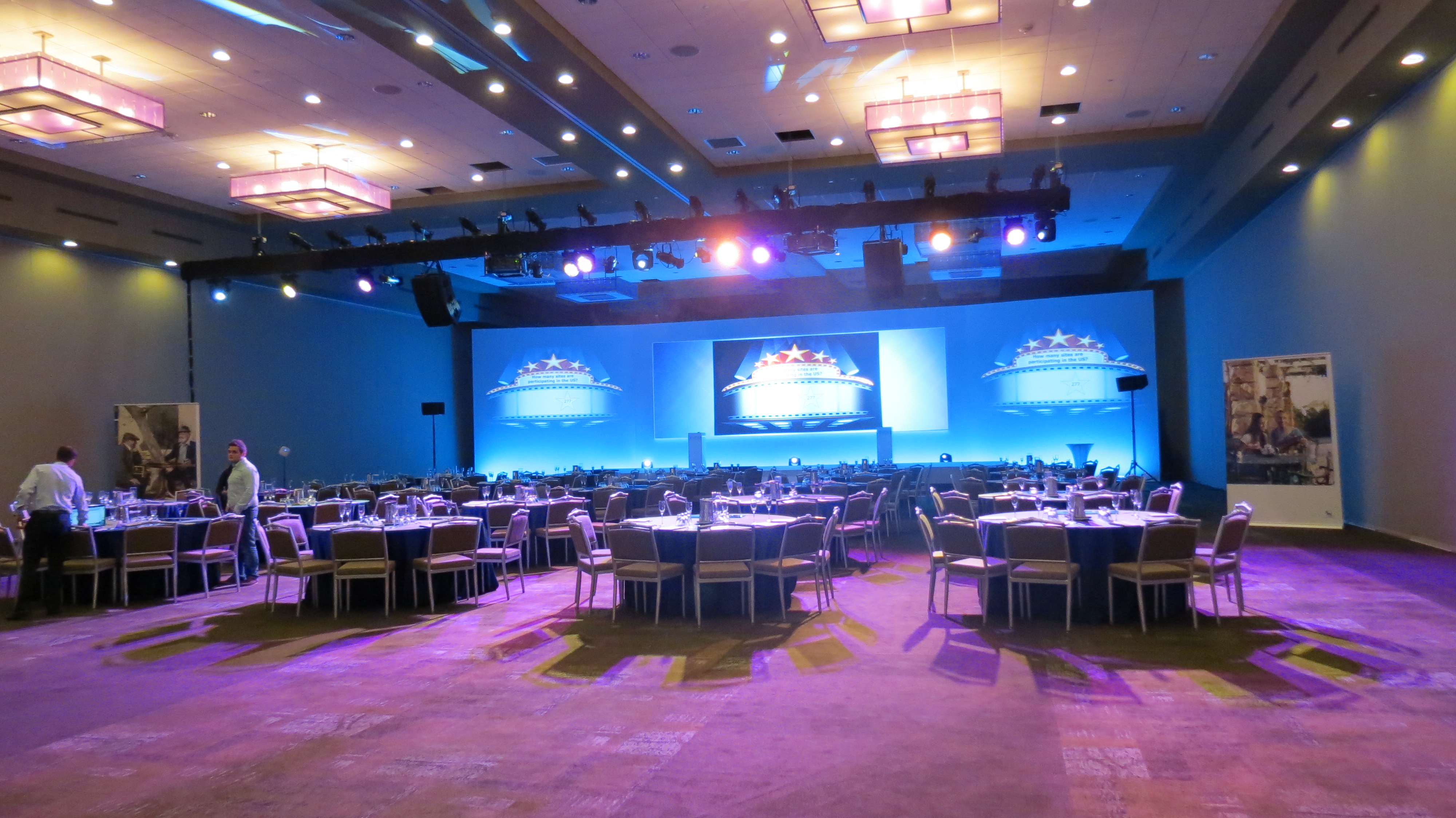 Sometimes technology evolves in an inconsistent, even illogical way. Take VR, for example. Audiovisual production services have been trying to incorporate immersive visual experiences into their events and presentations for over thirty years, despite capable resolution being nowhere near the quality needed to make such displays viable. But now, as 2019 draws to a close, ground-breaking 28K horizontal resolution has not only been proven possible and publicly demonstrated, but it may very well be accessible to you for your staging and video needs as well.

As originally reported in AV Magazine, this past October saw the unveiling of 28K horizontal resolution screens at Facebook’s Oculus Connect 6 conference. The event was staged by the California-based production company FNTECH. The screens themselves were the result of using Brompton Tessera SX40 video processors and ROE tiles. This impressive feat had been tested previously at Facebook’s developer conference. The resulting displays were clear, bright, detailed, and vibrant without causing eye strain or exhaustion for the audience, creating a truly strong and unique stage presence. The consistent success of these displays could mean they will soon be available for events big and small.

This latest achievement comes as FNTECH celebrates its sixth-year hosting and staging annual events for Facebook. Initially working as an audiovisual equipment rental company, FNTECH’s continued growth has naturally led to stunning technological innovations. For the Oculus Connect 6 conference, they crafted a massive, one-hundred and fifty-foot curved display (made of multiple screens) for the main stage. This display was comprised of over one-thousand ROE diamond tiles displaying over thirty-eight million pixels at one time. This was only one of several LED displays FNTECH created for Facebook’s conferences, but its role as a backdrop for keynote addresses has drawn a lot of attention from audiovisual and event staging companies.

Achieving these results isn’t a simple matter of using larger screens. Higher resolution means displaying more color elements (dots or pixels) on screen at once—not just different colors, but the total number of elements overall—which is limited by the power of the display more so than its dimensions. Larger screens, limited by lower resolutions are quite noticeable: each individual element can be seen from a distance (as can the space between them), the image appears stretched or blotchy, or the colors may be slightly off. This has been a problem with large televisions for years.

The larger the screen used, the higher the resolution you need to ensure a quality image. Visual production companies have been working around (or with) these issues with varying degrees of success, but the results couldn’t always avoid a distorted or overblown image. Now, with 28K horizontal resolution, continuous images or video can be displayed with crystal clarity, bringing awe-inspiring visuals to events in uncompromising professional quality.

It also requires powerful processing power. The Tessera SX40 is a 4K video processor. Its strength and flexibility we’re able to power all of the stage displays simultaneously while also working color correction duties to ensure the displays were faithfully reproduced for web broadcast across multiple platforms.

When 28k horizontal resolution screen setups become commercially available on a large scale, they will have the potential to change how companies big or small stage their events in the future. In the meantime, you can give yourself and your team an edge by learning how such screens will make your lives easier, your events more engrossing, and your company more notable.

Higher Definition for Your Displays

No matter what you’re using your displays for—be it live video, looping animations, or static images—you need to think about how it will be viewed from any distance or angle available to your audience. We tend to think of how a stage looks by viewing it straight on, but every member of your audience will have a different physical perspective, altering how they see the displays and the quality of what they see.

28K horizontal resolution provides an incredibly high level of definition previously unavailable on the commercial level. The higher number of color elements (twenty-eight thousand per column) allows for greater detail and a wider range of colors create more lifelike videos and images with greater depth. This means that the images are seen with fewer discrepancies among audience members.

Earlier we mentioned that a larger screen doesn’t automatically make for higher resolution. However, larger displays do lend themselves better to higher resolution output. Simply put, if you want to use large screens and displays for your staging, vying for 28K horizontal resolution could mean using less equipment for your setup.

Previously, larger video displays have had certain limitations despite how commonplace they are in the entertainment industry. Concerts, for example, have made use of massive displays to create dazzling light shows or synchronized video displays. But using the somewhat limited resolutions currently available on larger screens naturally creates image distortion and low-quality visuals. The solution has been working within those limitations, usually meaning relying on less color to make low resolution less noticeable or to use a rig of multiple displays. Powering each display requires its own setup, complicating the logistics of the entire arrangement. 28K horizontal resolution displays greatly minimizes the equipment needed.

FNTECH’s stage, for example, allowed for a faster setup and takedown thanks in part to requiring fewer cables to connect and power everything. Not only did this allow for a cleaner, more organized appearance for the setup itself, but it was a safer alternative for the event environment.

That isn’t to say that their staging wasn’t equipment intensive, mind you. It still made use of multiple LED displays and screens, a necessity to show a wide range of color over such a large space. However, they were able to use significantly fewer connections in their setup, cutting out many logistical complications that occur with large stage displays.

If you’re willing to dig a little deeper into the technical aspects of what resolution means for display, 28k horizontal resolution boasts over thirty-million pixels, each that can act as its independent color and light source. More pixels mean greater room when it comes to developing your displays, but that’s merely surface level. How you choose to use those pixels is limited only by your imagination, and with so many available in high resolutions, the displays that you create can be more immersive all around, creating a rich atmosphere for your event and a memorable setting for your audience.

Using more pixels is also beneficial to curved displays like those FNTECH used for their stage. Higher resolutions can minimize or eliminate distortions in the image and color that occur when using curved screens. Being able to create an enclosure out of your displays can be a powerful way to capture an audience’s imagination while cutting out surrounding distractions. While 28K horizontal resolution will be powerful for any staging displays, it makes curved displays a more viable option than they have been previously.

The strength of 28K horizontal resolution for event staging comes down to immersion. Making massive displays has always been available as an option but having that size without a greater function doesn’t make for enriching or memorable audience experiences. It may be impressive on its own, but without a greater purpose, it simply isn’t engrossing. FNTECH’s displays have garnered widespread acclaim not only for their technical capabilities but also for the unique atmosphere they created for the event itself. This may have been possible without 28k horizontal resolution, but it wouldn’t have been as simple to execute.

Larger event staging companies are the most likely to follow FNTECH’s lead with 28k simply because of the costs involved. However, as it proves to be powerful and effective in the event production world, the audiovisual industry will meet demand with less expensive tech solutions that achieve the same results. While we wait for that time to come, you may want to plan how you could utilize such displays in your events. By planning early you’ll have the advantage of knowing what you want beforehand and the flexibility to make changes as needed. Study FNTECH’s setups and those that will follow to get a better understanding of how the technology works and can be used. Even if you aren’t concerned with how you should at least take an interest in the creative ways other event production companies implement it.

Though FNTECH and Facebook’s use of 28k horizontal resolution is a groundbreaking moment for audiovisual production services, we can’t be sure how long we have to wait before the required technology becomes widely available for event production use. You can rest assured, however, that once it is American Audio Visual will be there to help, providing equipment rentals and expert staff so that you can use this exciting new technology to its fullest potential. Until 28k horizontal resolution displays become available to the general public, you may reach out to us at https://www.americanaudiovisual.com/ and we will help you get the most out of the top-of-the-line equipment so that you can stage incredible events.

Get the latest news & events from American Audio Visual by filling out our form: